If We Bury You Ass Up, We'll Have A Place To Park My Bike 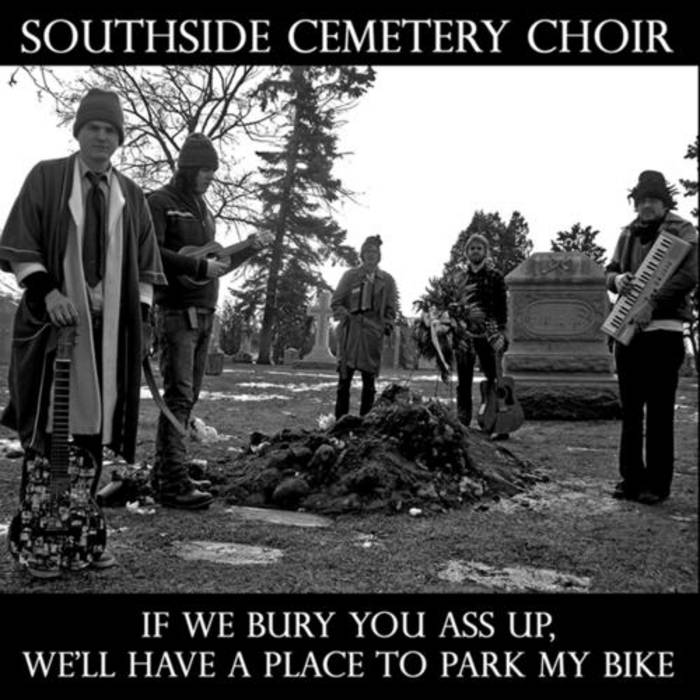 "All of these songs were written between August and September 2008 in various graveyards in South Minneapolis. Once a week we would visit a cemetery and give each other an hour to spread out with instruments including keyboards, banjo, guitar, ukulele, floor tom, electric bass, flute, etc. After the hour songwriting time limit was up we would meet back at the van and showcase what we’d done. Sometimes we went during the day. Sometimes we would sneak in at night. We then recorded the best ones in the basement of our house known as New Pines. The songs all appear here as they were first written in those graveyards."

- from the accompanying text document.

After realising that one of my favourite albums was inaccessible to the general public, I asked to distribute it and was granted permission by whoever responded to me from the Sleeping in the Aviary facebook page. A lo-fi fairytale if there ever was one.

Every aspect of this project, from the concept to the contents of the lyrics, struck a chord with my teenage (and current) self in a way that few better known albums have. It's likely that without its influence I probably wouldn't do the kinds of projects I do today, and this newborn Bandcamp label might not exist.

Maybe I will release a limited cassette run if there is some interest, but for now it's probably best continuing its journey as a free download.

Other bands they were/are in:
A Paper Cup Band, Sleeping in the Aviary, Dirty Paws, Inboil, Rupert Angeleyes.

If you like If We Bury You Ass Up, We'll Have A Place To Park My Bike, you may also like: