by Memorials of Distinction 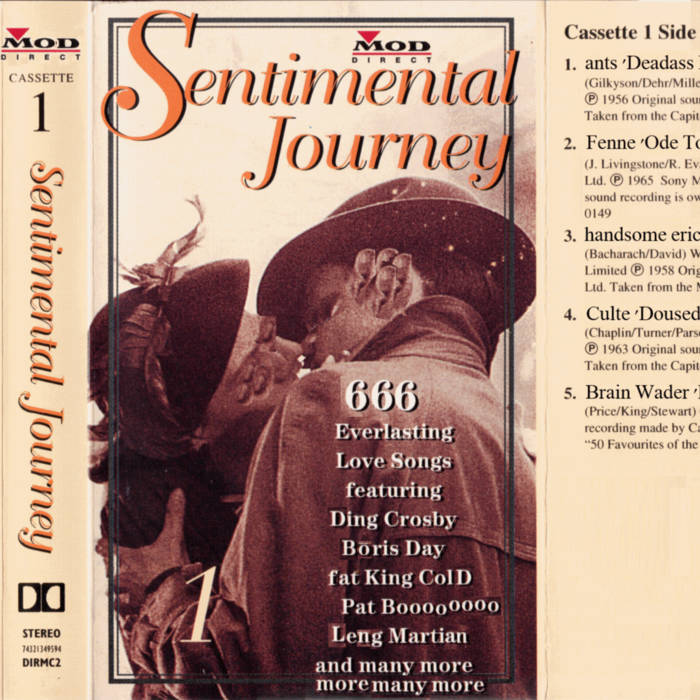 Anyone who says music was better in the old days is an idiot who should be brutally murdered. Old music is rubbish.

In an effort to make the world a better place, MoD bought 33 copies of a compilation tape of particularly crap old music - BMG's 'Sentimental Journey' - and have radically repurposed their corporeal vehicles of affected emotion.

The cassettes have been emptied of their disgusting post-war shmaltz, and are now full to the brim with the best contemporary underground pop music attainable. Slash-and-burn, baby. Slash-and-burn.

This is the second compilation by MoD to recycle cassettes. A couple of the artists on this one were on the last, albeit in very different forms. Most are new. All are brilliant.

IN ORDER OF APPEARANCE:

Snotty post-4chan-shoegaze kid(s) from Texas. If My Bloody Valentine worshipped Death Grips... they wouldn't be this good. Pretty sure this was the band John Cusack signs after catching them shoplifting in the film High Fidelity. Jack Black hates them coz he likes lame old rock music. Don't listen to Jack Black, these guys fucking slay. Hopefully will release some kind of full project from these punks before I am taken in death's kind embrace.

FKA Hany bany happy hour. The booming voice of Belgian goth-gazers Whispering Sons. I met Fenne when we both lived in Prague in 2014. She showed me this song after a party at her flat and it burrowed right into my chest and laid a bunch of eggs there. Darker than a black hole, with a similarly inescapable field of gravity. I pray every day that she'll make more music.

An ugly guy called Stephen from Ireland. He makes music to accompany you through the meaningless abyss of existence. This track is so great and moving and speaks to the bit of yourself that knows how much you fucking suck. Allison's Gate, SUEP and I were going to do a cover of it but we got busy being useless pieces of shit, quite fittingly, and never did. :'(

FKA Teen Cult. Genius dream pop teen from Australia. Used to post pictures of dogs wearing sunglasses on twitter and is a suspected communist. This track exhibits the results of her development from scuzzier guitar based songs to more deeply ethereal electronic sounds. Zebrafi heard this track and told me it sounded "too good" for my label. Fuck off, mate.

Kind of growing to be somewhat of a legend already, Boston's best son churns out gritty indie rock goodness like no one else. How is it so catchy? How is it so well structured? How is he such a relentlessly lovely seeming guy? What the fuck? I want to hear him on my imaginary FM radio when I drive to my imaginary friend's house in my imaginary car in the imaginary US state I sometimes imagine living in.

Allison's Gate has been quietly working on semi-improvised, often free form, music for a few years. Slowly she is starting to include more structured elements. This track is, I think, a great halfway point between those two poles in her work. This track completely fucked me up when I first heard it, and continues to do so on every re-listen. If you get to see her play this life, you might die. I'm so excited to hear what she does next. Hopefully it'll come out on MoD!

Stationed in Brighton, SUEP runs Fat Dog Party - the events wing of Corporations Inc., which Memorials of Distinction is a part of. She used to be the singer of Lizzard Bleach, did a turn in O. Chapman, and currently yelps along in Porridge Radio's band. Now she makes music spanning from this twisted disco number, to completely incomprehensible swirling splurges. On this track, she's partially backed by the lads from Carheart. One day SUEP will manically run the whole world - the rest of us will just have to deal with it.

A teen torn between his love of Oasis and knowing that he should know better. It's tough growing up in London suburbia. Zebrafi's debut track was about narcissistic wankers in the NME. This one's about getting wrecked at illegal raves. Such a lovely lad. Introduce him to your parents. He's planning on starting a live band once he goes to university, so keep an ear to the ground... and maybe join in?

An elusive character from Brighton. Only heard JPWR's music when Porridge Radio's bassist, Madilda Royale aka Cannibal Orange, sent some to me on the sly. I was blown away. Pop music from the future. Emotion music from space.

The drummer of Soft Cough, hailing from NY state. This dude knows his way around an obscenely catchy post-emo tune or two. Was very hard to decide which of the tracks from his incredible debut release, 'mane braider', to include on this tape, so make sure you check the rest of them out. Opens the door to my cold, cold heart.

These two genuine postmen only used a phone to record this song. It's the best song on this tape (sorry other artists, but it's true). These guys are currently living in what used to be a school for troubled kids in Brighton. Come to think of it, it is still for troubled kids. These guys are the only ones lucky enough to be on this cassette technically twice, and they deserve every minute they take up. I wish all music was this good, but sadly it isn't.