by Or Sobre Blau 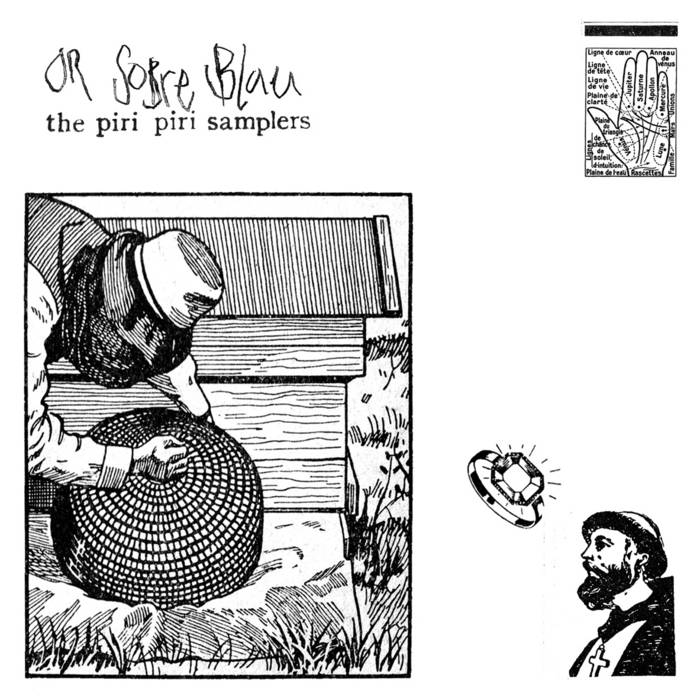 Or Sobre Blau is a duo consisting of Andreu G. Serra (Ubaldo, Odd Labu) and Kiran Leonard. The project originated when the pair lived together in Penha de França, Lisbon. Having moved to Portugal at the same time by chance, from Southern Catalonia and North-West England respectively, the two tend to communicate in a poor garble of Spanish, English, Portuguese and Catalan, which gives rise to misunderstanding, disputes and comedy. This dislocation is reflected in the group’s name, a literal translation into Catalan of the Portuguese idiom ‘ouro sobre azul’ (blue over gold) roughly equivalent to the English phrase ‘the cherry on top’. In Catalan, this phrase is meaningless and somewhat bland.

Their debut cassette, ‘The Piri Piri Samplers’, was recorded over three days at their rehearsal space/home in Summer 2017. The recordings are an attempt to map the members’ distinct and complementary approaches to the guitar. With a vast array of pedals and tapes, Serra creates thick, winding soundscapes, drones punctured by occasional stabs and flourishes. Leonard’s more straightforward, technical playing often acts as a harmonic foil. In sparser moments, the two feel their way through a hesitant counterpoint, exchanging chords and melodic fragments to build a sequence somewhere between them. In this sense, it is like all effective duos. The sum is greater than its constituent parts; each party only understands two-thirds of what is going on; the unknown and wrongly interpreted triumphs over composition and reason. Or sobre blau it is.

What do you find in the middle of noise and harmony? A very old question, really. We know that the answer is usually endearing and a little tragic, like a bad translation. It ends up looking like a vase broken into pieces.